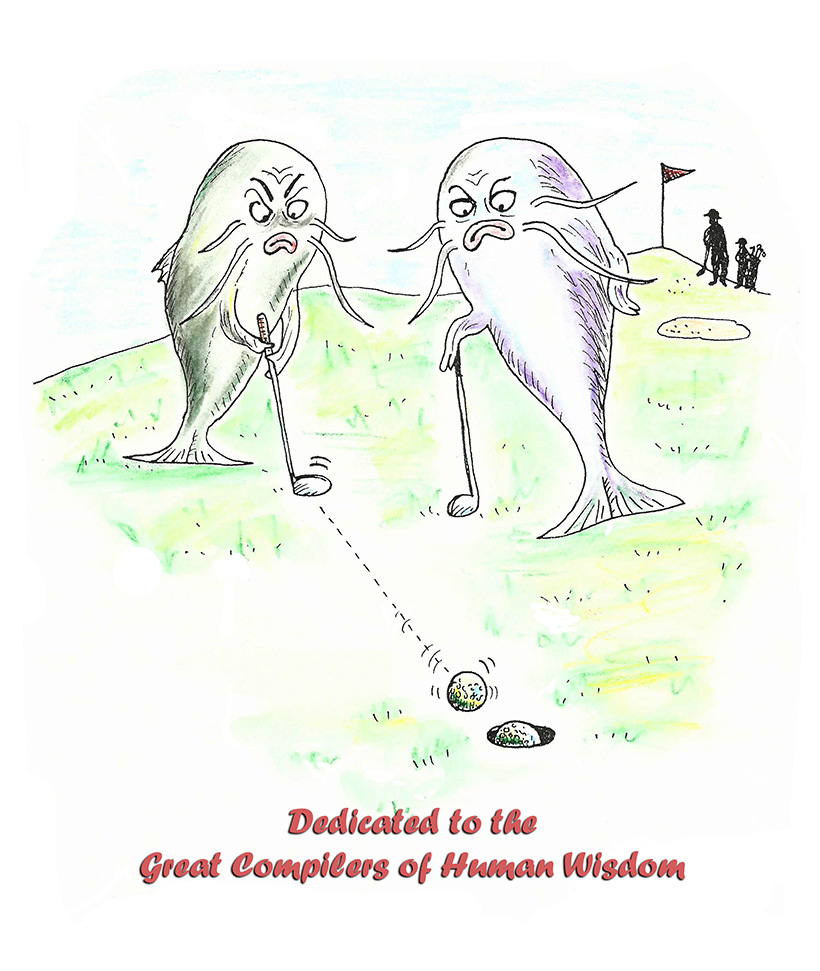 Posted by Starmandala at 1:11 AM No comments:

To say that this folksy collection of Malay sayings (generically called peribahasa) represents only the tip of a veritable iceberg would be metaphorically correct, if climatically inappropriate, considering the steamy, tropical, kampung environment from which they have sprouted.

For generations, thousands of Malay proverbs, idioms, aphorisms, homilies and whimsical turns of phrase remained oral legacies - until 1878 when W.E. Maxwell began publishing parts of his personal collection in the early journals of the Straits Branch of the Royal Asiatic Society.

In the 1890s two swashbuckling British civil servants and Malay scholars, H.C. Clifford and F.A. Swettenham, took on the task and started a short-lived trend; R.J. Wilkinson, J.L. Humphreys, and R.O. Winstedt were among those who followed suit.

Peribahasa  enjoyed  a burst of renewed interest in the 1930s, an era that saw notable compilations by E.S. Hose, A.W. Hamilton, and a Kelantanese scholar - Muhammad Adnan bin Muhammad Arifin, or M.A. Muhammad Adnan, if you happen to be a stickler for tradition and insist on the double initials that appear to be the hallmark of all bona fide compilers of peribahasa.

C.C. Brown, a retired civil servant and lecturer in Malay at the University of London, produced a lively and authoritative collection in 1951. The book was reissued  by Graham Brash in 1989. In 1992 the Malaysian Branch of the Royal Asiatic Society published an updated edition of E.S. Hose's compilation. It was edited by Tan Sri Dato' Dr Mubin Sheppard. To these last two publications I am greatly indebted, for I have relied heavily on them as references.

One of the endearing qualities of Malay sayings is their extremely graphic imagery, and I have claimed artistic licence with some of them. While many sayings are broadly interpreted, the ones with ribald connotations, in particular, have been prone to dilution as parents and schoolteachers with prudish tendencies have thought it fit to bowdlerize (or launder) them before handing them down to their children.

It is hoped that the zany flavor of the drawings and the freestyle elaboration in the text will underscore the ageless relevance and applicability of these homespun peribahasa.

Antares
Magick River
1999
Posted by Starmandala at 1:10 AM No comments: 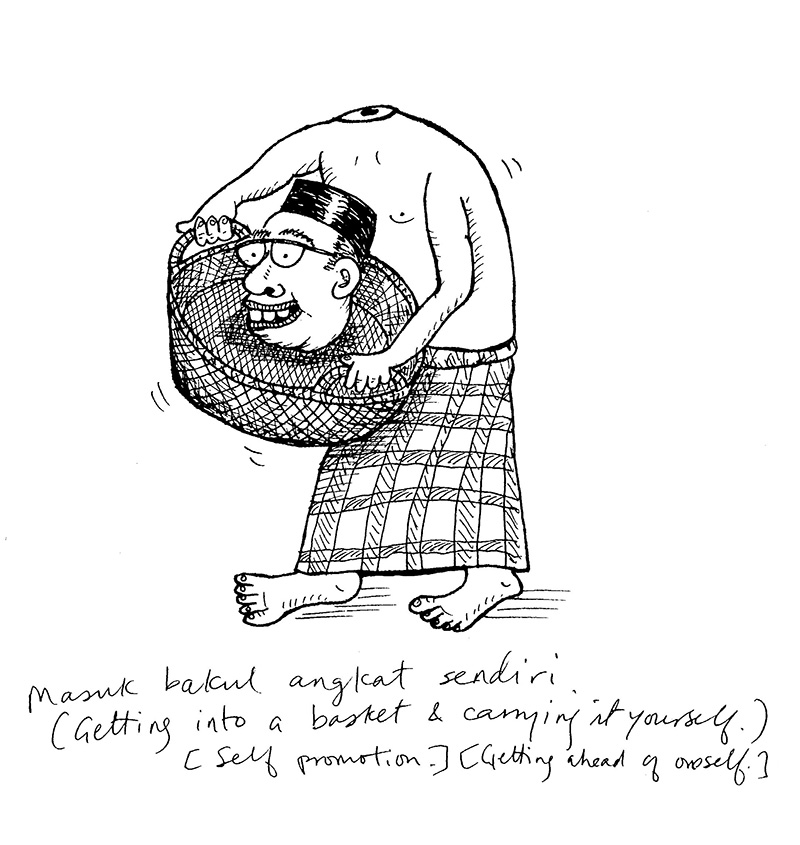 1.  Masuk bakul angkat sendiri
Getting into a basket and carrying it yourself

Self-promotion, Overweening pride.
Counter-productive egotism; getting ahead of oneself.

2.  Air dicincang tidak putus
You may slash water but you can't sever it 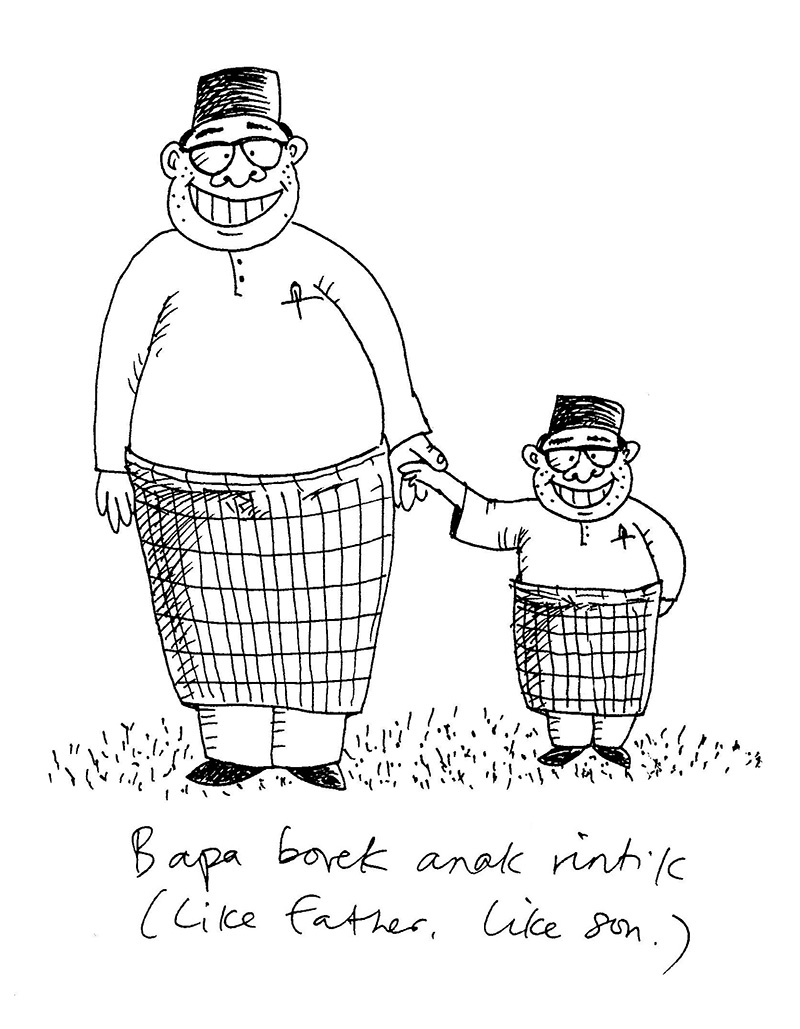 3. Bapa borek anak rintik
Where the father is speckly,
the son will at least be freckly

4.  Air digenggam tiada tiris
When he grabs water, not a drop
seeps through his fingers

Said of the avaricious. Tight-fisted. An Ebenezer Scrooge. 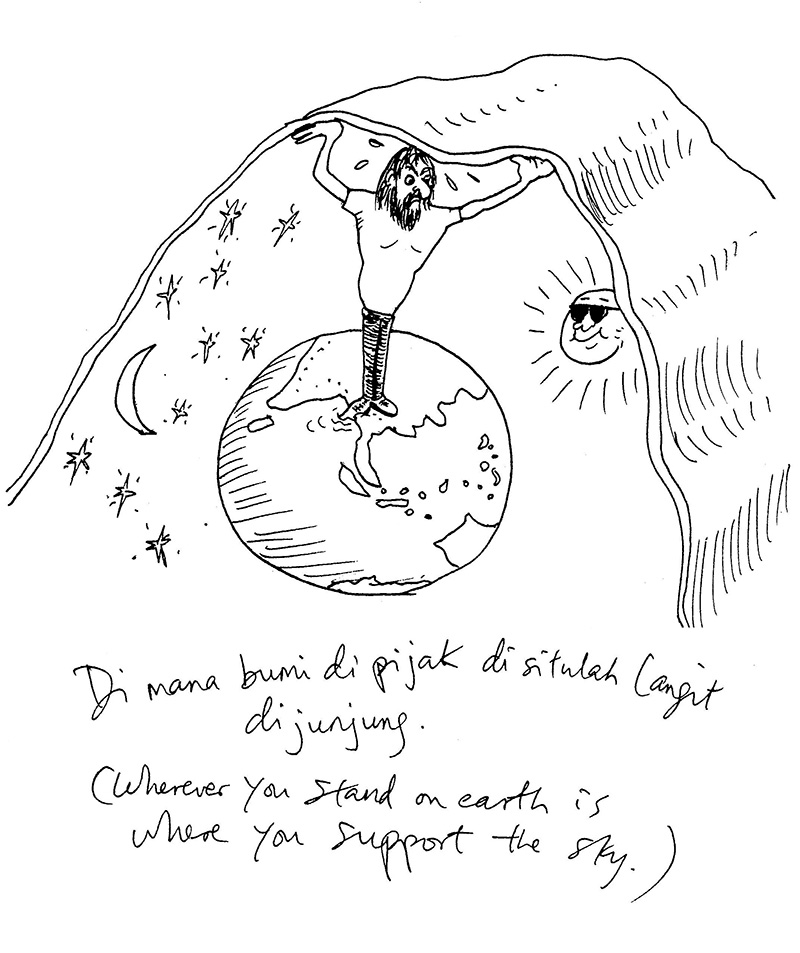 5.  Di mana bumi dipijak
di situlah langit dijunjung
Wherever you stand on earth
is where you support the sky

A lowly birth is no exemption from a noble life.
A spoilt past is no reason to ruin a good future.
Regardless of one's circumstances, one can still be a paragon of virtue.
Sometimes interpreted as a call to patriotism.

Consider yourself amply blessed. What more could one ask of life? 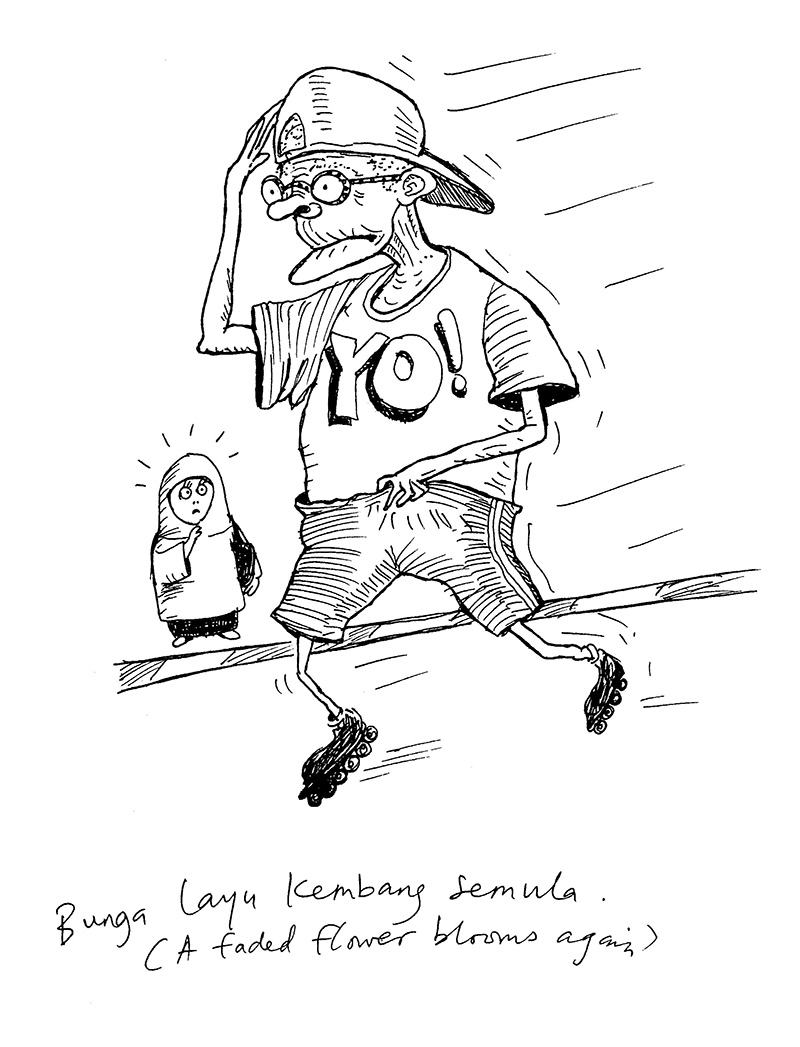 Vindicated by time, making a comeback, reinstated into favor.
Or making a futile attempt at staying fashionable. Mutton dressed as lamb.

In other words, don't do things in half-measures.
Go the whole hog. One may as well be hanged for a sheep as for a lamb. 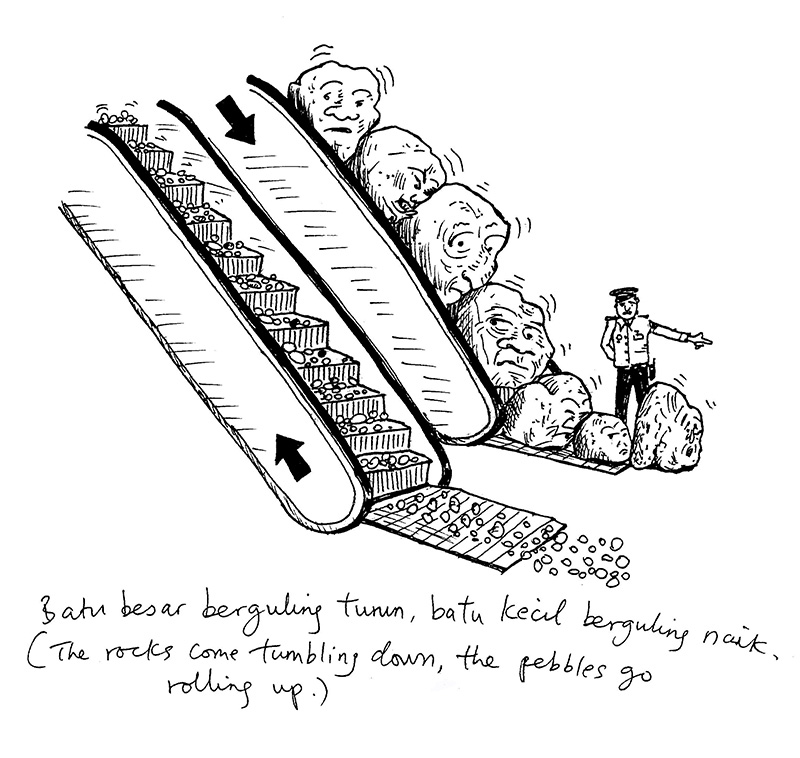 The rich fall and the poor rise in the whirligig of time.
What goes up must come down. How the mighty are fallen.
Vico's theory of cyclical evolution expressed in kampung terms.

10.  Bertemu telaga di kaki bukit
Finding a well at the foot of a hill

A limitless supply of pure water, never again shall one thirst.

Be late if you must, but get there safe and sound

The slow-but-sure approach may not win any races,
but it is sometimes wiser to leave the competition altogether.

To the optimist this could only mean money;
to the pessimist, pills and bills to pay!

There's more than one fish in the sea.
Usually offered as consolation for those who have lost their lovers. 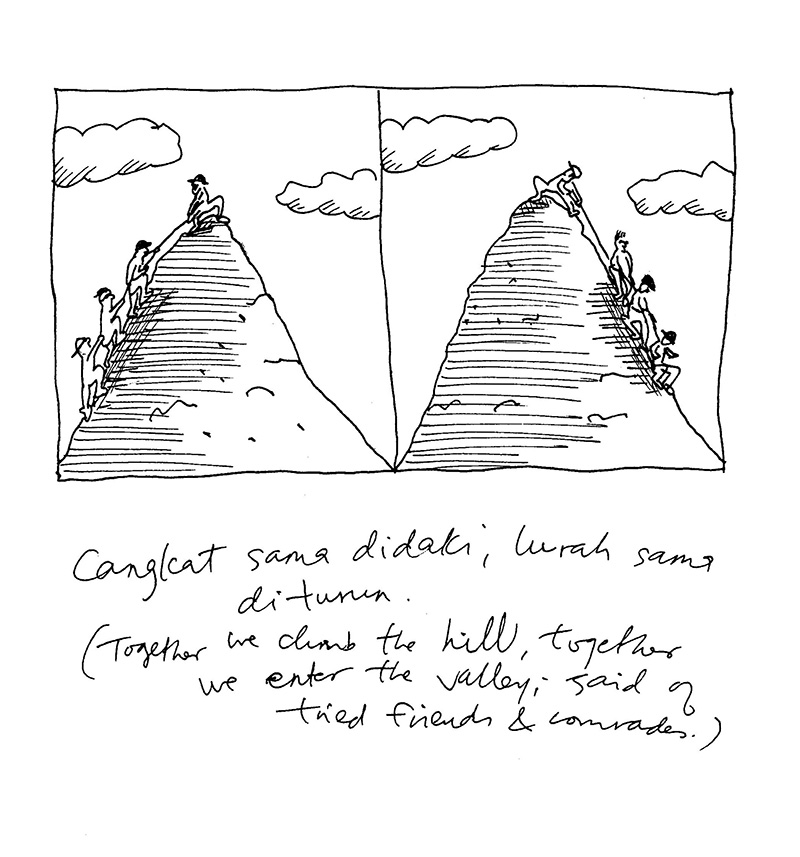 Together we climb the hills,
together we descend into the valleys.

Sticking together through thick and thin. Said of tried friends and comrades.
Many variants have arisen, e.g., ringan sama menjinjing,
berat sama memikul (together we carry the light objects in our hands,
together we lift the heavy burdens on our shoulders).

In a more Gary Larsonish vein: hati gajah sama dilapah,
hati kuman sama dicecap (together we carve the elephant's heart,
together we savor the heart of the microbe).

Similarly, berkuah sama menghirup, bersambal sama menculit
(when there's gravy we'll lap it up together, when there's pickles
we'll share the snippets). Friends are made in wine and proved in tears.

Real friendship does not freeze in winter. Comrades to the bitter end! 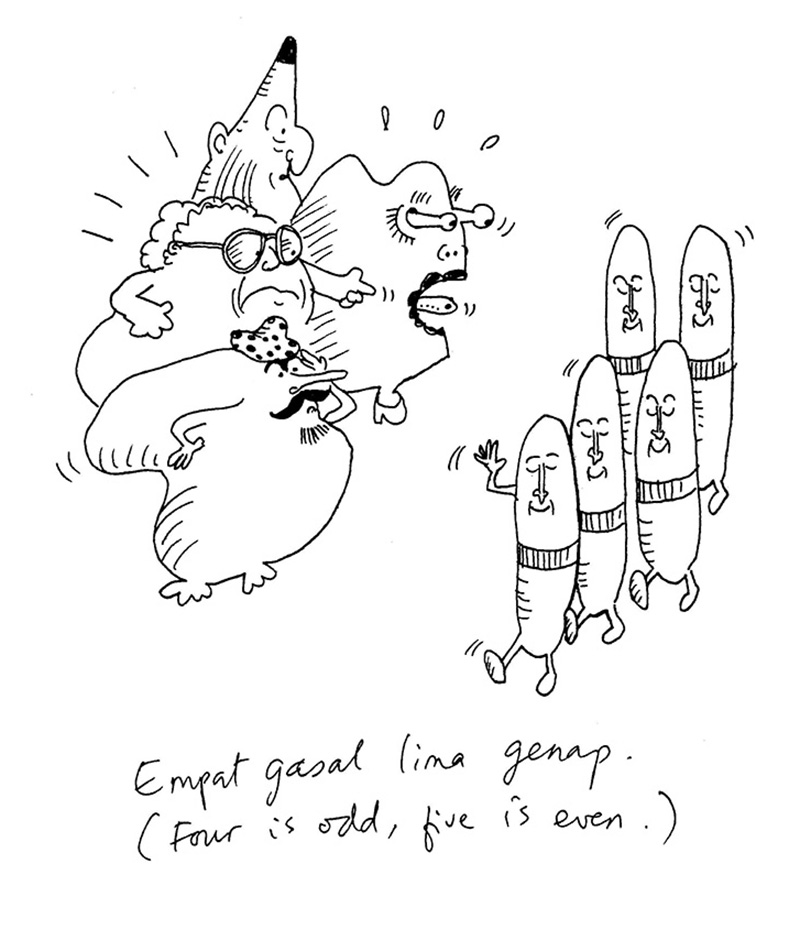 15.  Empat gasal lima genap
Four is odd, five is even

Absolute nonconformity. Said of someone or something totally contrary:
"With so-and-so white is black."

Sudden relief after long suffering. But does the reverse apply? 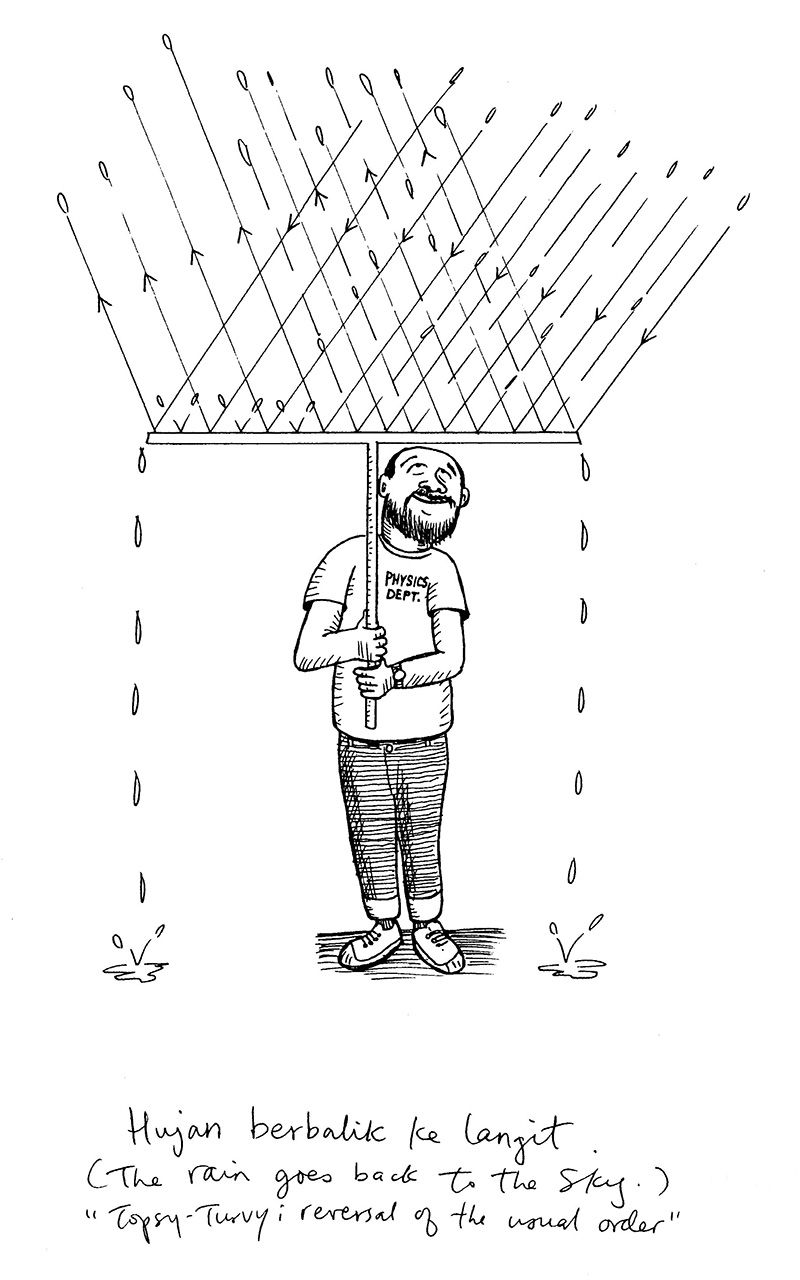 The rain goes back to the sky

Reversal of "the natural order": a topsy-turvy situation,
as when the student professes to teach the master.
The tail wagging the dog. Teaching one's grandmother to suck eggs.
(Today, however,  we all know that the natural order is cyclical -
and that the rain does, in fact,  go back to the sky when it evaporates!) 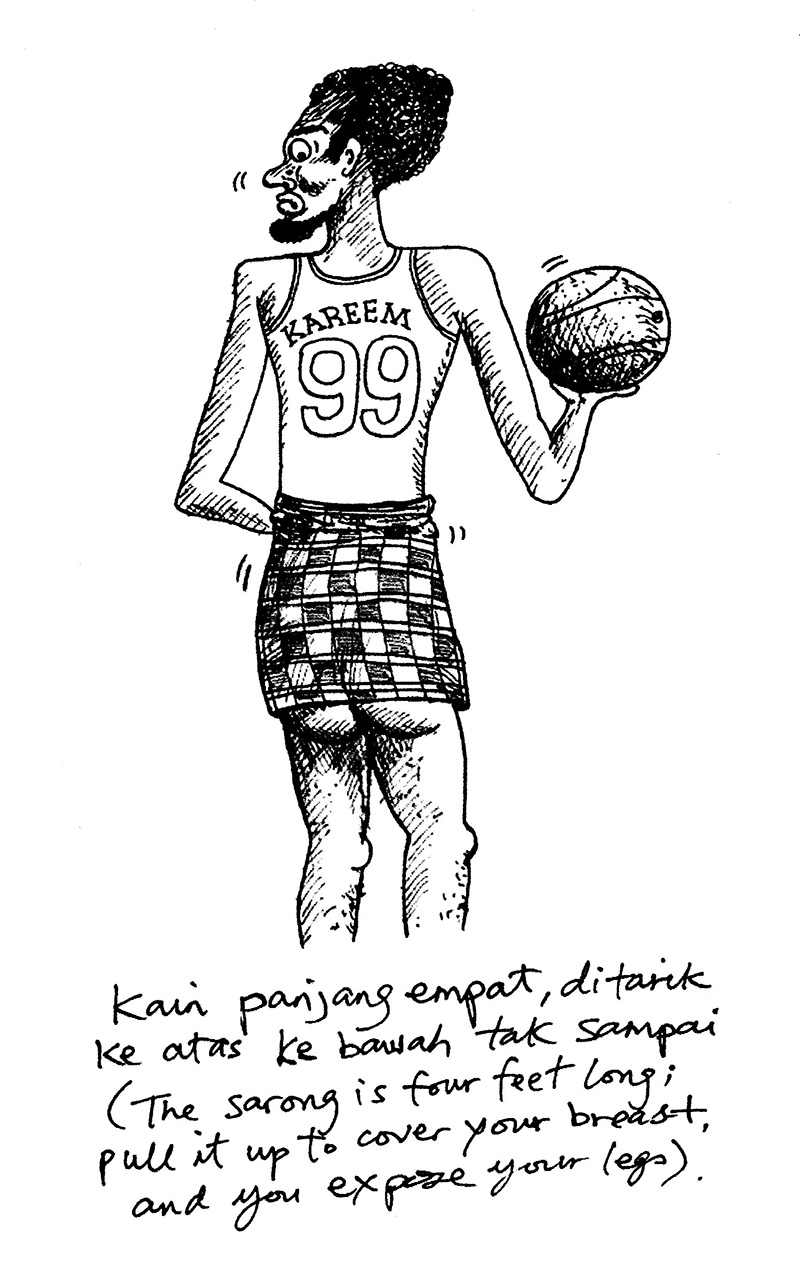 19.  Kain panjang empat, ditarik ke atas ke bawah tak sampai
The sarong is four feet long; pull it up
to cover your breast, and you expose your legs

Burning the candle at both ends. Said of someone overstretching
his or her resources.  You can't please everybody.

20.  Kapal besar ditunda jongkong
The big ship is towed by a dug-out

Led by one's inferiors. A benevolent leader under the influence of parasitic minions. 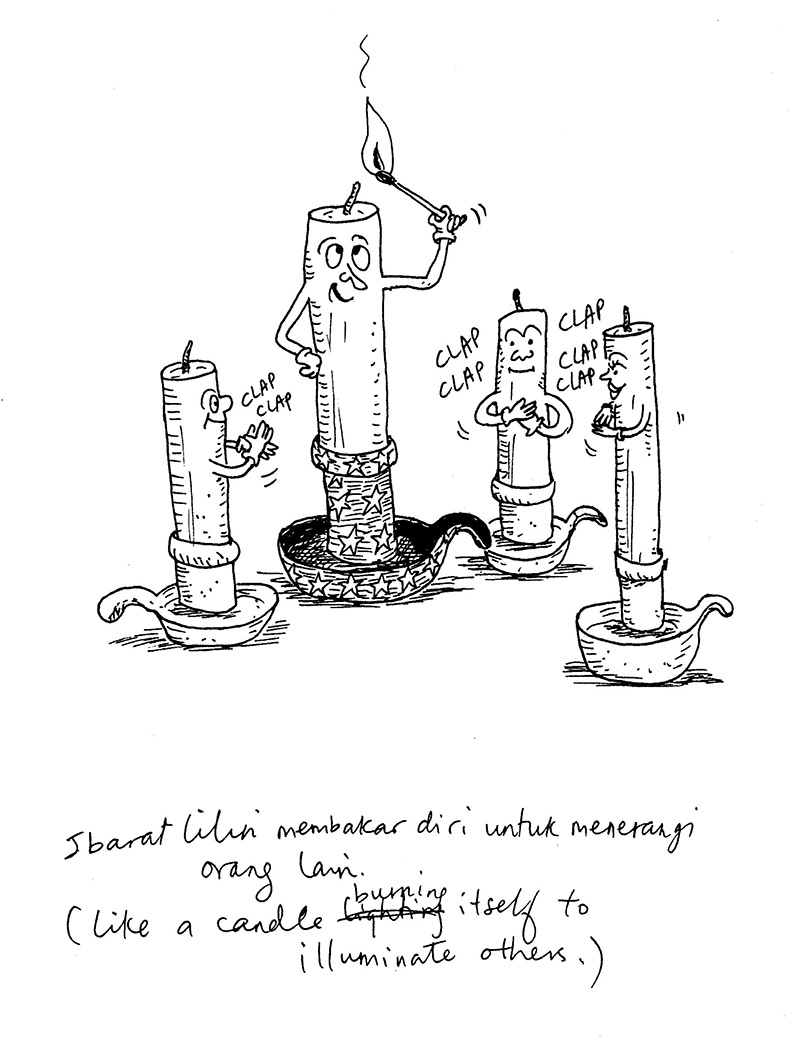 An imprudent act that could result in thirst. Don't count your chicks
before they're hatched. A bird in hand is worth two in the bush.
And don't drop that bone into the pond just because
you think you've seen a bigger one. 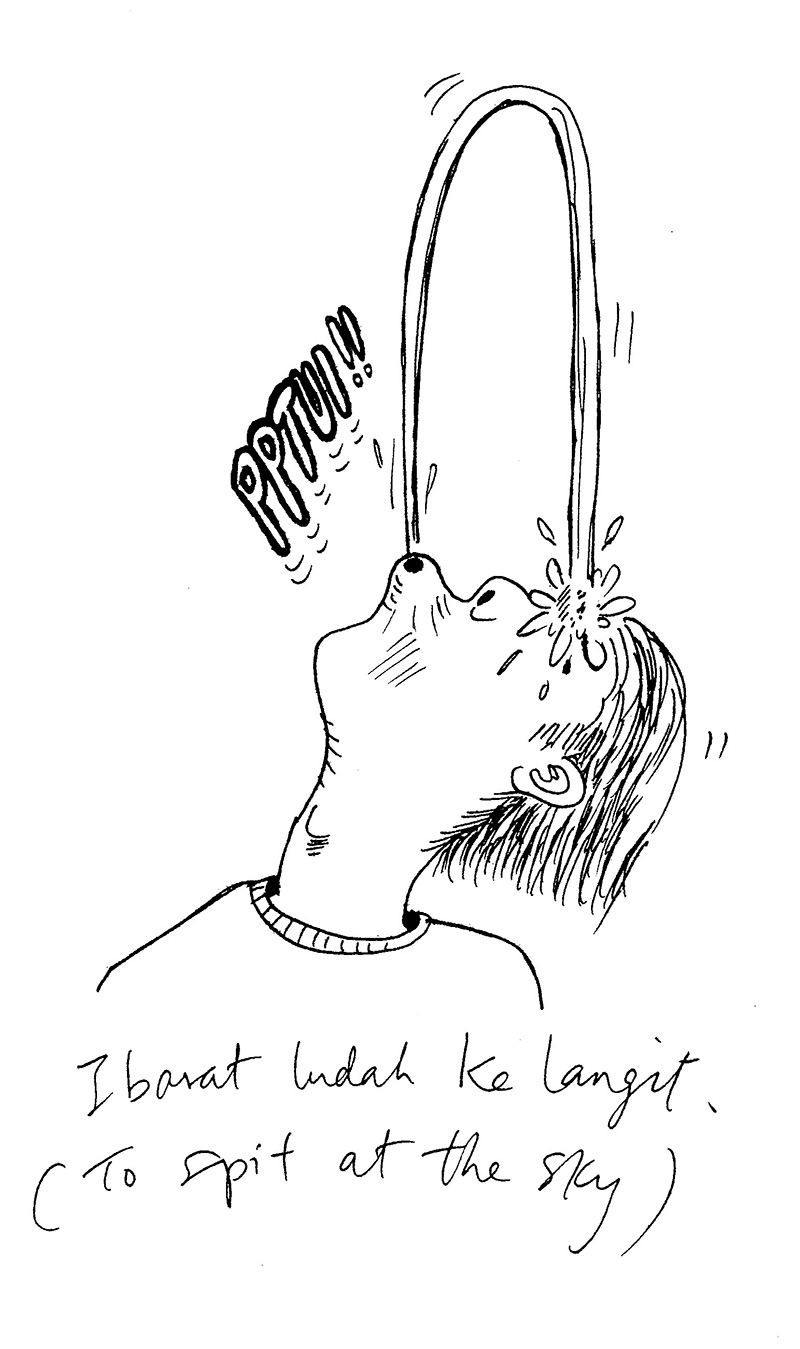 23.  (Ibarat) Ludah ke langit
(timpa ke muka sendiri)
To spit at the sky (and hit your own eye)

Slander flings stones at itself. Speak ill of your own family
and the injury recoils on yourself.

To shoot yourself in the foot. People in glass houses shouldn't throw stones.
It's an ill bird that fouls its own nest. Alternatively rendered as:
Ludah ke langit, timpa batang hidung sendiri
(spit at the sky and the spittle lands on your nose).

24.  Permata jatuh di rumput
pun gilang
A gem will sparkle even in the grass

True worth will reveal itself. You can't keep a good man down. 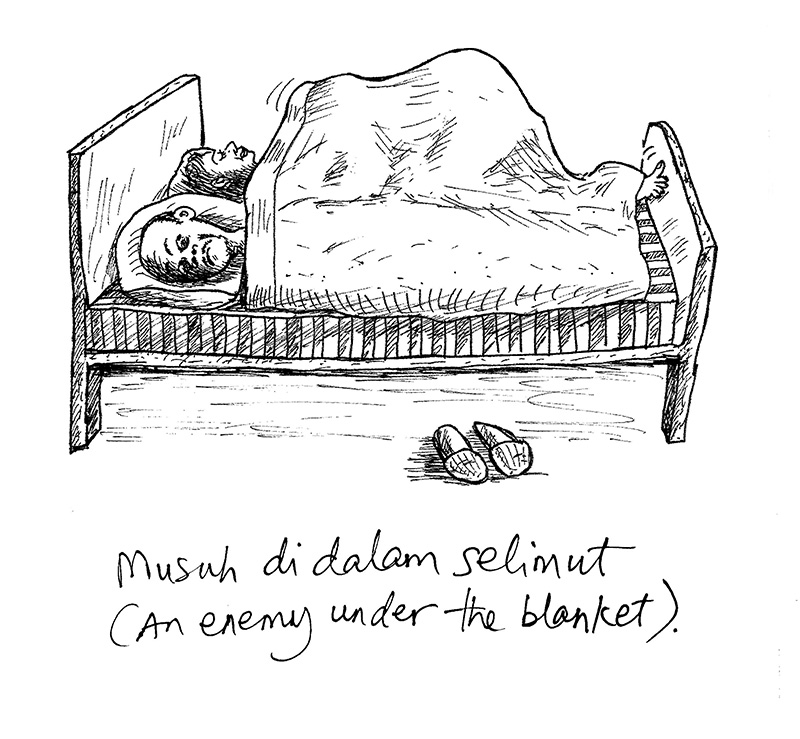 25.  Musuh di dalam selimut
An enemy under the blanket

A traitor in the household. Often used against unfaithful wives.

It was once common practice to add a drop of indigo (a dark blue dye) to the wash to accentuate the whites but, in this instance, the milk not only gets no whiter,
it becomes undrinkable. One bad apple is enough to ruin the whole barrel.

A bad workman blames his tools. 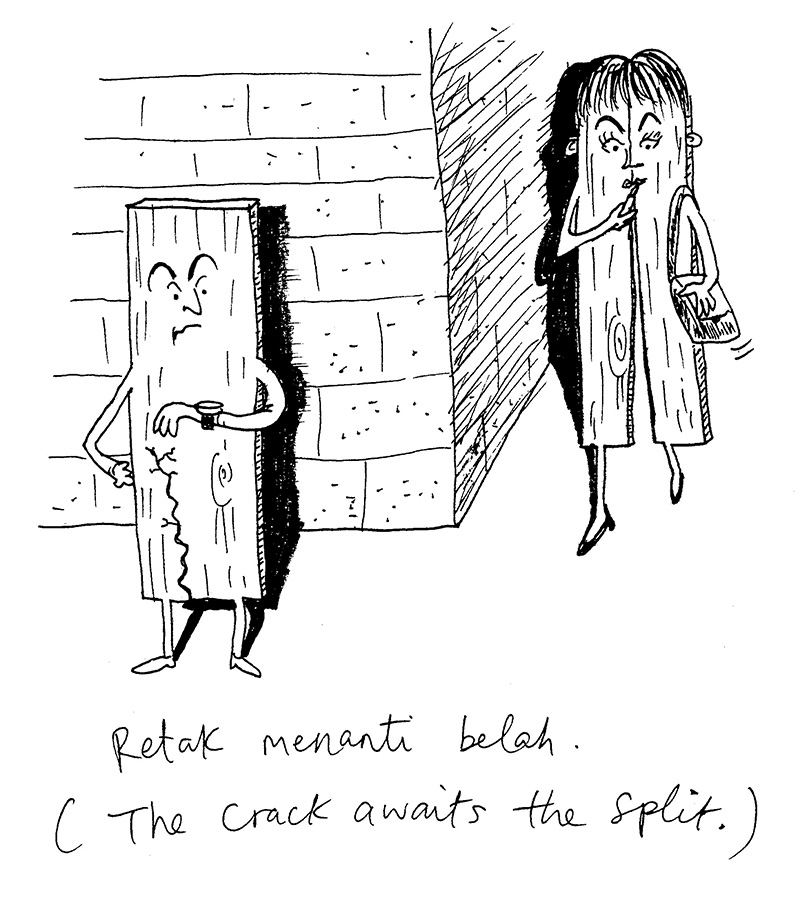 The crack awaits the split

The little rift within the lute. Said of relationships and situations that are close to breaking point, requiring only the slightest excuse to snap completely. Sometimes rendered as retak mencari belah (the crack seeks the split)  - in which case the parties involved are really just looking for "a decent excuse" to terminate a moribund contract. The final straw (that broke the camel's back).

As cotton is consumed by fire

Swift and utter destruction. Helpless as a dewdrop in the midday sun. 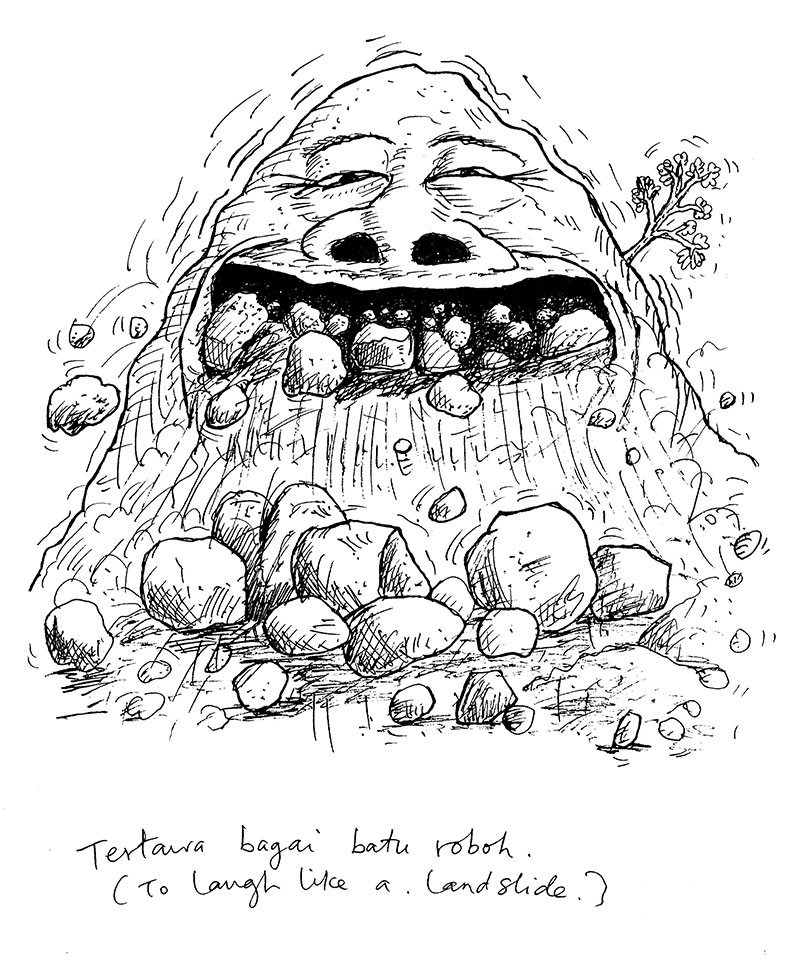 Roaring with mirth from the depths of one's belly.
In England people prefer to laugh like drains.

If you swallow your mother dies,
if you spit your father dies

Little by little it becomes a hill

The virtue of perseverance. Look after the pennies
and the pounds will take care of themselves. 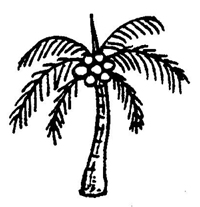 Posted by Starmandala at 1:03 AM No comments:

FOWL PLAY IN THE FARMYARD 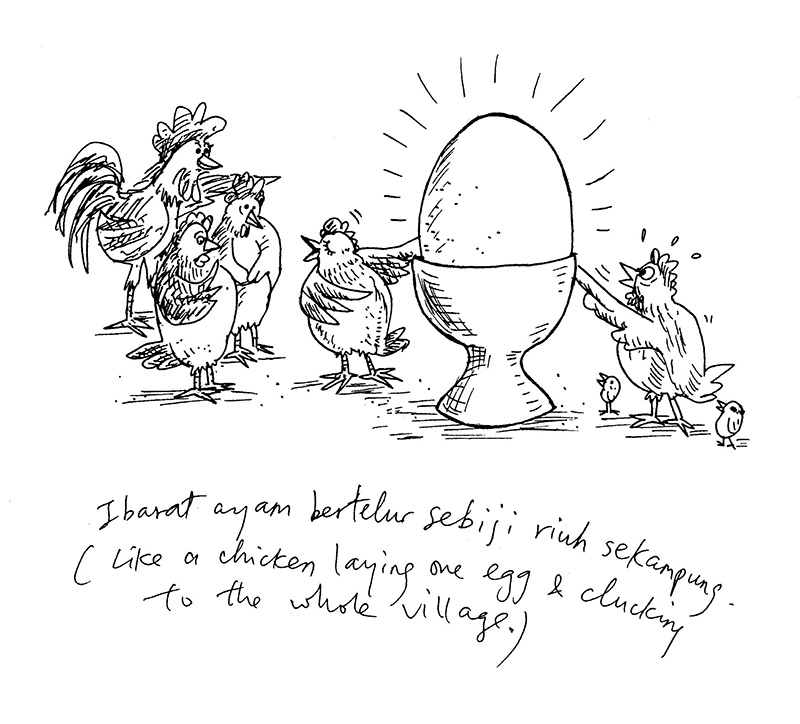 Much ado about nothing. Braggadocio. To blow one's own trumpet.
The greatest talkers do the least. Rendered in its full, formal glory:
Penyu bertelur beribu-ribu seorang pun tak tahu, ayam bertelur sebiji
pecah khabar sebuah negeri (the turtle lays eggs by the thousands
and no one knows of it; the hen lays one egg and breaks the news
to the whole nation).

34.  Apa lagi sawa?
Dia berkehendak ayam lah
What do you expect from a python?
Of course he's after the chickens A fishy story, difficult to verify. An obscure and mysterious case
in which no judgment is possible. Things that go bump in the night.
Quoted in the annals of the Malay Court of Justice:

A black fowl flies by night,
Alighting in the screw-pine;
A rustling is heard but nothing is seen.

A clear-cut case, obvious circumstances.
Beyond any shadow of doubt. Clear as day.

A white fowl flies by day,
Alighting in the courtyard,
In full view of the public. 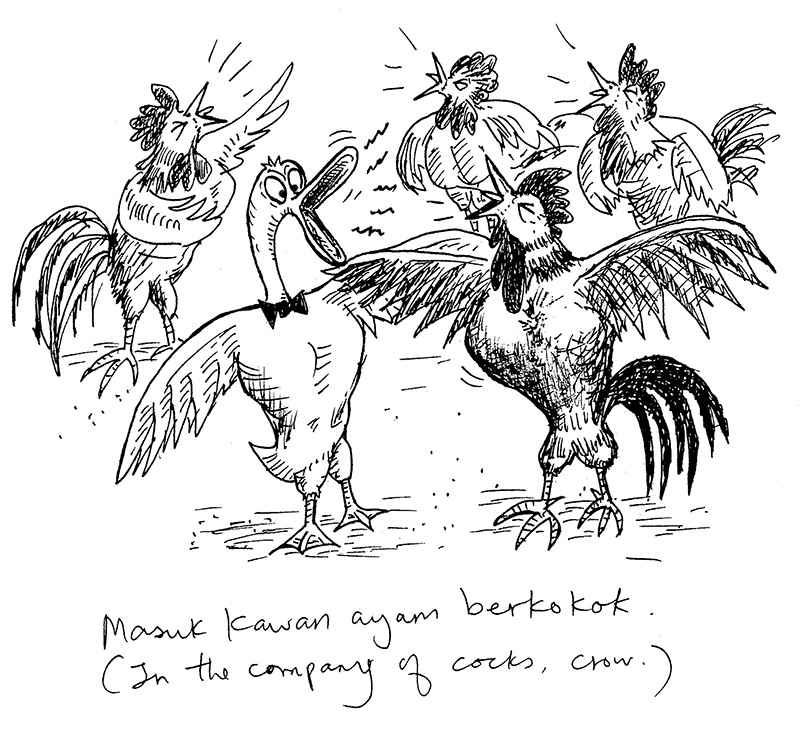 37.  Masuk kawan ayam berkokok
If you find yourself among cocks, crow

Be versatile, blend with the crowd, conform! When in Rome, do as the Romans.
Similarly, masuk ke dalam kandang kambing mengembek
(if you enter a goat-pen, bleat); masuk kawan kerbau menguak
(in the company of buffaloes, bellow); masuk kawan gajah menderin
(when with elephants, trumpet)

Traditionally said of someone who has been jilted.
The image, however, is graphic enough to describe any situation
where carefully laid plans are blown asunder, leaving a messy aftermath.
A down-to-earth version of "What man proposes, God disposes."

39. Bertelingkuh antan di lesung,
ayam juga yang kenyang
When pestles clash in the mortar,
it's the chickens that eat well

A familiar scene in every kampung: chickens pecking merrily away
whenever grains are being pounded. Nowadays the chickens
are armed with law degrees. 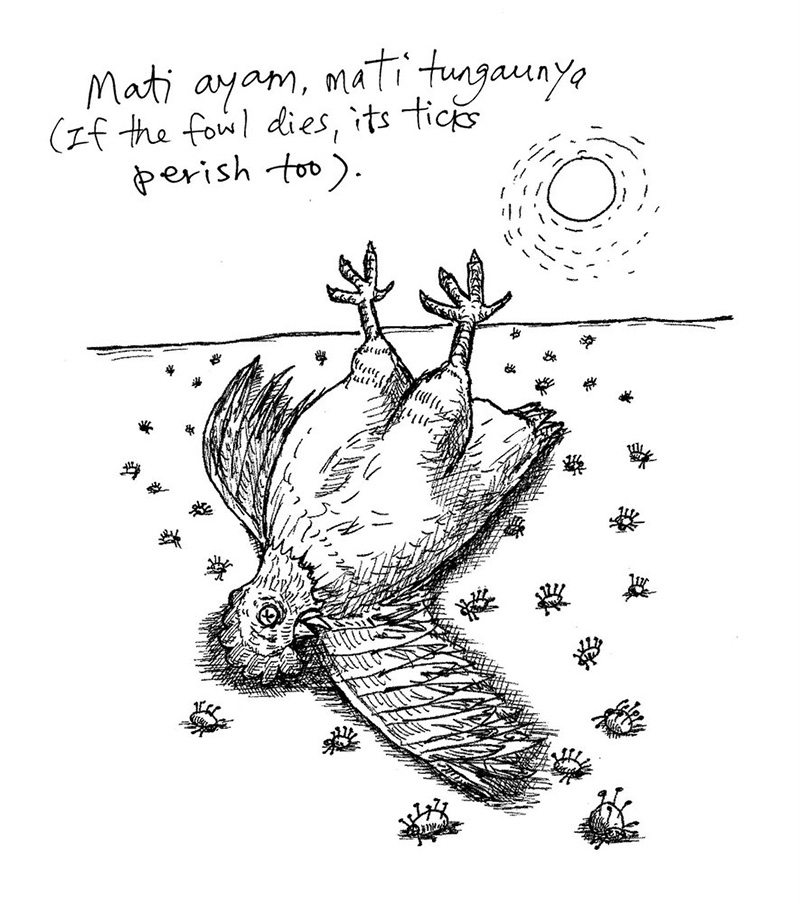 40.   Mati ayam, mati tungaunya
If the fowl dies, its ticks perish too

When misfortune befalls the mighty, the impact is also felt
at the bottom of the scale. Compare this with langit runtuh bumi cair
(the sky collapses and the earth dissolves).

A prince's underlings are crushed by his fall.

41.  Gagak ganggang telur
A crow with an egg in its beak

The whiteness of the egg makes the crow appear even blacker.
Said of ill-favored individuals in beautiful clothes, where their lack of beauty
is only accentuated by their fine apparel.

A hunchback in high heels. 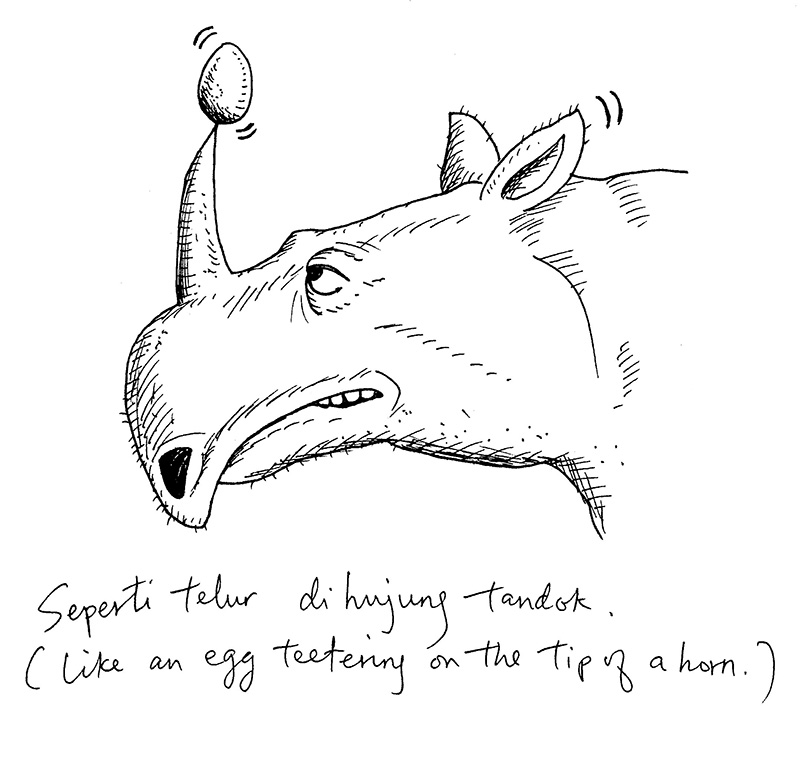 42.  Telur di hujung tanduk
An egg teetering on the tip of a horn

Posted by Starmandala at 12:12 AM No comments: 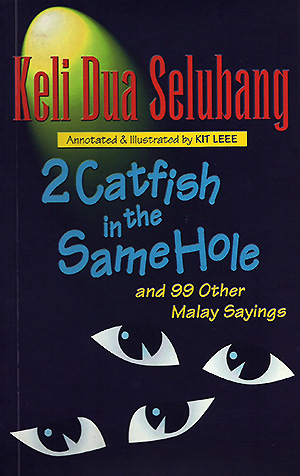 In case you were wondering... nope, I didn't design the cover! :)

WHAT THEY'RE SAYING ABOUT 'TWO CATFISH'...

“Every parliamentarian ought to have a copy handy.” ~ Ayam the Cock

“Humble homilies blown out of all proportions.” ~ Katak the Frog

“This is a hole-in-one of a collection.” ~ Keli the Catfish

“Any resemblance to characters living or dead or fast asleep is purely coincidental.” ~ Manusia the Human

MOONY for the impetus and inspiration

FRANÇOISE HUGHES for the French connection

MARY MAGUIRE for her contributions to the text

SALLEH BEN JONED for his positive feedback and advice

HANI AHMAD & JENNIFER RODRIGO for the use of their Macs

KHADIJAH ABDULLAH for her encouragement and support

CHUAH GUAT ENG for her integrity, generosity and kindness 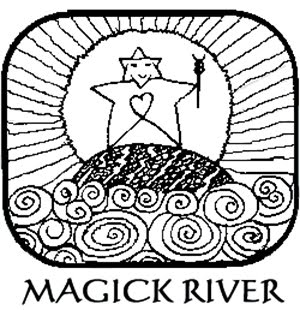 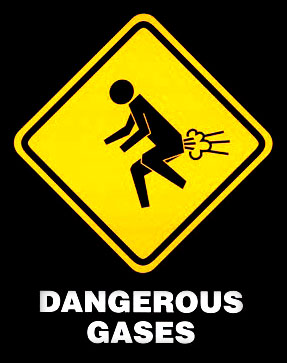 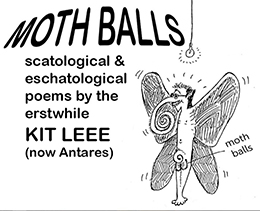 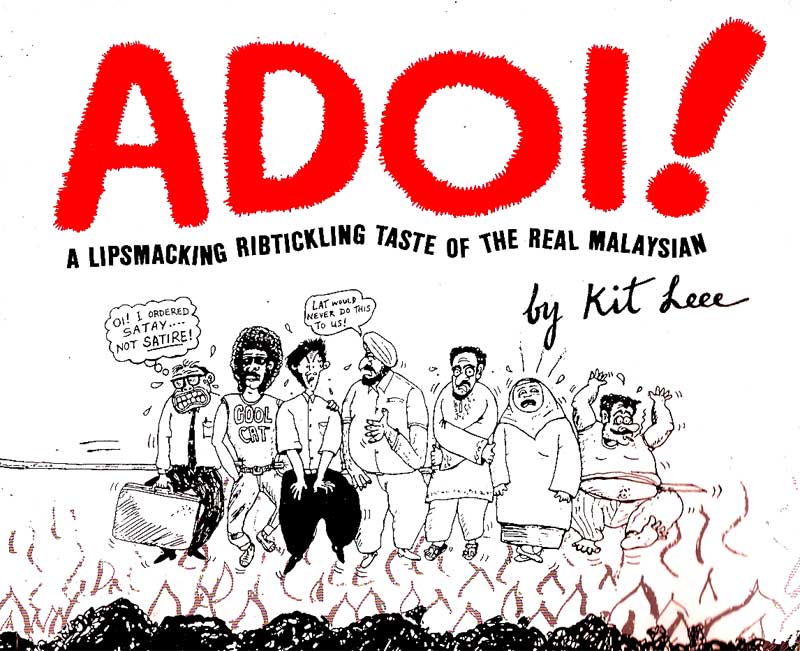 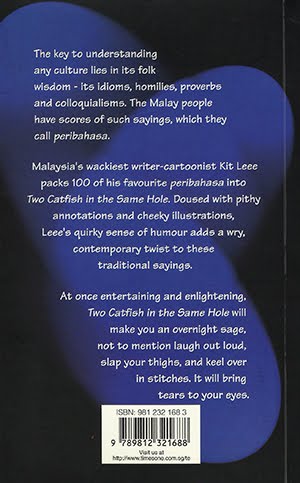 Why GUANO BREATH? Well, I tried a whole bunch of other names but they were all rejected. And 'The Beatles' & 'Pink Floyd' were already taken.